The Fatal Sisters. An Ode

In the eleventh centurySigurd, Earl of the Orkney Islands, went with a fleet of ships and a considerable body of troops into Ireland, to the assistance ofSictryg with the silken beard, who was then making war on his father-in-lawBrian, King of Dublin: the Earl and all his forces were cut to pieces, andSictrygwas in danger of a total defeat; but the enemy had a greater loss by the death ofBrian, their King, who fell in the action. On Christmas-day (the day of the battle), a native ofCaithnessin Scotland saw at a distance a number of persons on horseback riding full speed towards a hill, and seeming to enter into it. Curiosity led him to follow them, till looking through an opening in the rocks he saw twelve gigantic figures resembling women: they were all employed about a loom; and as they wove, they sung the following dreadful song; which when they had finished, they tore the web into twelve pieces, and (each taking her portion) galloped six to the north and as many to the south.

1 [*]
[*] Note — The Valkyriur were female Divinities, Servants of Odin (or Woden) in the Gothic mythology. Their name signifies Chusers of the slain. They were mounted on swift horses, with drawn swords in their hands; and in the throng of battle selected such as were destined to slaughter, and conducted them to Valhalla, the hall of Odin, or paradise of the Brave; where they attended the banquet, and served the departed Heroes with horns of mead and ale.
Now the storm begins to lower,
2 (Haste, the loom of hell prepare,)
3 Iron-sleet of arrowy shower[*]
[*] [The Latin translation renders the original rifs reidisky ('the hanging cloud of the warp-beam' according to Cleasby & Vigfusson, An Old Icelandic Dictionary, s.v. rifr) by nubes sagittarum, an error which Gray incorporated into his poem.]
How quick they wheel'd; and flying, behind them shot
Sharp sleet of arrowy shower —
Milton's Paradise Regained. [iii. 323-4]
4 Hurtles in the darkened air. [*]
[*]
The noise of battle hurtled in the air.
Shakespear's Jul. Caesar. [II. ii. 22]
5 Glittering lances are the loom,
6 Where the dusky warp we strain,
7 Weaving many a soldier's doom,
8 Orkney's woe, and Randver's bane.
9 See the grisly texture grow,
10 ('Tis of human entrails made,)
11 And the weights that play below,
12 Each a gasping warrior's head.
13 Shafts for shuttles, dipped in gore,
14 Shoot the trembling cords along.
15 Sword, that once a monarch bore,
16 Keep the tissue close and strong.
17 Mista black, terrific maid,
18 Sangrida and Hilda see,
19 Join the wayward work to aid:
20 'Tis the woof of victory.
21 Ere the ruddy sun be set,
22 Pikes must shiver, javelins sing,
23 Blade with clattering buckler meet,
24 Hauberk crash and helmet ring.
25 (Weave the crimson web of war)
26 Let us go, and let us fly,
27 Where our friends the conflict share,
28 Where they triumph, where they die.
29 As the paths of fate we tread,
30 Wading through the ensanguined field:
31 Gondula and Geira, spread
32 O'er the youthful King your shield.
33 We the reins to slaughter give,
34 Ours to kill and ours to spare:
35 Spite of danger he shall live.
36 (Weave the crimson web of war.)
37 They, whom once the desert-beach
38 Pent within its bleak domain,
39 Soon their ample sway shall stretch
40 O'er the plenty of the plain.
41 Low the dauntless Earl is laid,
42 Gored with many a gaping wound:
43 Fate demands a nobler head;
44 Soon a King shall bite the ground.
45 Long his loss shall Eirin weep,
46 Ne'er again his likeness see;
47 Long her strains in sorrow steep,
48 Strains of immortality!
49 Horror covers all the heath,
50 Clouds of carnage blot the sun.
51 Sisters, weave the web of death;
52 Sisters, cease, the work is done.
53 Hail the task, and hail the hands!
54 Songs of joy and triumph sing!
55 Joy to the victorious bands;
56 Triumph to the younger King.
57 Mortal, thou that hear'st the tale,
58 Learn the tenor of our song.
59 Scotland, through each winding vale
60 Far and wide the notes prolong.
61 Sisters, hence with spurs of speed:
62 Each her thundering faulchion wield;
63 Each bestride her sable steed.
64 Hurry, hurry to the field.

Typography, spelling, capitalization, and punctuation have been cautiously modernized. The source of the text is given and all significant editorial interventions have been recorded in textual notes. This ECPA text has been edited to conform to the recommendations found in Level 5 of the Best Practices for TEI in Libraries version 4.0.0.

The Fatal Sisters. An Ode by Thomas Gray 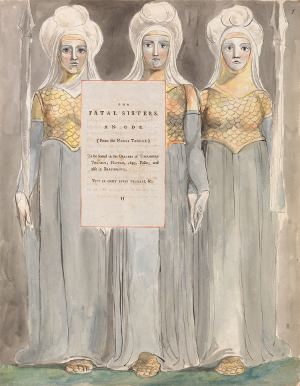 "The Fatal Sisters" (left, title page of William Blake's imaginative illustrations to the poem) was written in 1761 and first published in Gray's collected Poems (1768). Gray composed his late imitations of Old Norse and Welsh verse ("The Fatal Sisters", "The Descent of Odin", "The Triumphs of Owen") in the context of his projected History of English Poetry, which he spent a decade researching and collecting materials for, but which remained unfinished. As dramatizations of prophetic speech, these later imitations follow on from his earlier compositions ("The Bard" and "The Progress of Poesy", both 1757), and share common themes, such as orality, performance, and poetic voice.1

Gray based "The Fatal Sisters" largely on a Latin translation of the Old Norse original, which dates back to the 11th century. The poem dramatizes the three sisters' song as a prophetic account of the Battle of Clontarf, fought on 23 Apr. 1014. As an enactment of a prophecy, the poem foregrounds the performative role of both form and content for the process of establishing meaning. The performative nature of the poetic form in "The Fatal Sisters" becomes apparent by paying close attention to sonic, rhetorical, and syntactic phenomena, which can be observed though ECPA's phonological and syntactic analytical layers.

The striking rhythm of the four-beat line, which Gray may have glimpsed in the Old Norse original, plays an important role throughout the poem, signalling that the prophecy can only be understood as song, as a chant-like performance. The heptasyllabic line with its driving, drum-like rhythm "DUM-da DUM-da DUM-da DUM(-da)" (or, metrically spoken, its catalectic trochaic tetrameter +-|+-|+-|+(-)/) evokes the unfolding subject matter of the battle-field. The complete regularity of stanzaic and syntactic alignment further contributes to the successful interplay of form and subject matter as equal players in establishing a coherent meaningful whole. 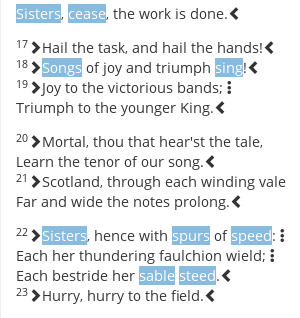 Another contributing factor to the overall effect is the large number of assonances, consonances, and alliterations in the poem. Dominant alliterative sounds such as /w/ (in the refrain "(Weave the crimson web of war)" in ll. 25 and 36, which culminates in the anaphora of ll. 51/2 "Sisters, weave the web of death; / Sisters, cease, the work is done."), and /s/ (in the final third of the poem, starting l. 39 "Soon their ample sway shall stretch" and ll. 47/8: "Long her strains in sorrow steep, / Strains of immortality!" and culminating in the final stanza with l. 61 "Sisters, hence with spurs of speed:" and l. 63 "Each bestride her sable steed.") provide additional internal coherence.

ECPA's integrated display of core analytical layers not only allows for insights on each of these levels, but, more importantly, also prompts the closer examination of their interrelatedness over time. This sketch of some of the more prominant prosodic and rhetorical features may thus serve as a starting point for further investigation.

Other versions of this work

Other works by Thomas Gray