ON THE PROSPECT OF PEACE,

To the LORD PRIVY-SEAL.[ed.]
[ed.] John Robinson (1650-1723), clergyman and diplomat, who had spent 30 years in the diplomatic service, mainly in Sweden, was on his return to England appointed Bishop of Bristol (1710) and Lord Privy Seal (1711). He was first British plenipotentiary in the peace negotiations to end the War of the Spanish Succession (1701-1713) and the first to sign the treaty of Utrecht in June 1713, which formally ended the war. See also DNB. (AH)

(Page images digitized by the Eighteenth-Century Poetry Archive from a copy in the archive's library.)

The text has been typographically modernized, but without any silent modernization of spelling, capitalization, or punctuation. The source of the text is given and all editorial interventions have been recorded in textual notes. Based on the electronic text originally produced by the TCP project, this ECPA text has been edited to conform to the recommendations found in Level 5 of the Best Practices for TEI in Libraries version 4.0.0.

On the Prospect of Peace by Thomas Tickell 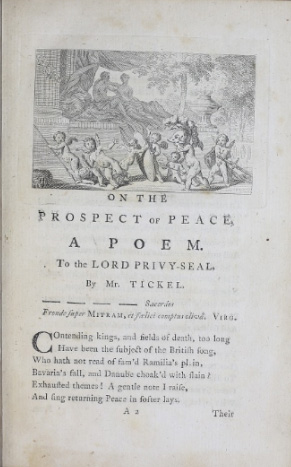 The poet and politician Thomas Tickell (1685-1740), a near exact contemporary of Alexander Pope's, is probably best known today as Addison's literary executor and editor of his Works. Tickell's poetry has largely dropped out of the modern canon, he is not now widely read or even studied at university. Despite the availability of his poems in a historical-critical edition, prepared by Helgard-Stöver-Leidig in 1981, Roger Lonsdale was possibly the last modern editor to anthologize one of his poems (for his ground-breaking 1984 anthology).

Tickell's On the Prospect of Peace was first published on 28 October 1712, two months before the Utrecht peace negotiations commenced to end the 14-year War of the Spanish Succession. One of many celebratory poems written at the time, Tickell's poem was one of the more popular contributions. It went through six editions within two years of publication and was widely anthologized in miscellanies throughout the eighteenth century. Tickell, who attended The Queen's College and later acted as Joseph Trapp's deputy as Professor of Poetry, wrote On the Prospect of Peace while still at Oxford, where he made a name for himself with a topographical poem of the same name in 1706.

In On the Prospect of Peace both the topographical and political dimensions become immediately obvious and can be easily visualized in ECPA by enabling the display of named entities in the pragmatic analytical layer. Nearly 200 references to over 100 geographical and personal names (in a 500-line poem) highlight the richness of the political, geographic, and historical tapestry laid out in the poem. This simple colour-coded visualization draws the reader's attention and focus to investigate the many rich references and allusions to warring factions, battles, kings and queens, or famous generals, and provide the sense of history in the making that made the poem popular across the contemporary political spectrum. 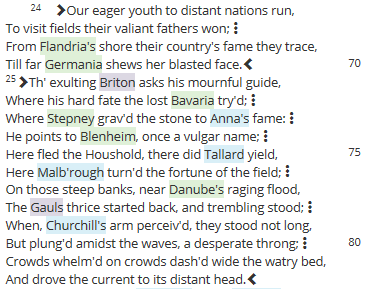 Alexander Pope's praise for Tickell's versification (he saw his own Windsor-Forest partly as a response to and in dialogue with Tickell's poem), can serve as a second example of how ECPA's presentation of analytical results in a visual and interactive manner can help with the exploratory analysis of the poem. By enabling "sentencing" in the syntactic layer we can see that Tickell's poem, written in heroic couplets, shows almost complete regularity with regard to stanzaic and syntactic alignment. The few irregularities promptly draw attention to instances of heightened emotional expression, in the form of rhetorical devices such as apostrophe, exclamatio, and rhetorical questions. Similar levels of regularity can be identified with regard to rhyme (nature of similarity) and metre, although the significance of individual deviations can only be assessed by paying close attention to their concrete function in the text.

ECPA's integrated display of core analytical layers not only allows for insights on each of these levels but more importantly prompts the closer examination of their interrelatedness over time. It is through analysis of some of these aspects that we hope that even a poem as deeply rooted in the intricacies of the contemporary political situation as On the Prospect of Peace will become not only more accessible but will also encourage the reader to explore the literary, historical, and political landscape that prompted its composition.

Other works by Thomas Tickell